It is common place for people to say that martial arts originated in the far east (China, Japan). On occasion, I have heard people come close to the correct point of origin by saying Greece. With that I asked myself, “If it is true that every culture that had a need for any army had a form of martial arts, then why would it not be logical that martial arts originated where MAN originated?” I have come to learn that martial arts hieroglyphics appeared on the walls of Egyptian tombs 3,400 years B.C., before the arts arose in China and Japan. These hieroglyphics are found on the ancient temple of Karnak in Egypt. Every nation, or “tribe” in Africa has its own complex and complete martial arts styles and these styles can be seen all over the world.

Englishman Percy Newberry, while working for the Archaeological Survey of Egypt between 1890 and 1892, Newberry carried out “excavations” at Beni Hasan. The results were published in a two volume work as the First and Second Memoirs of the ASE (Percy E. Newberry, Beni Hasan, Part I [London, 1893] and Beni Hasan, Part II [London, 1893]. He states that graffiti on the walls that were written in Greek further proves that the Greeks were frequent visitors to the tombs in ancient times. 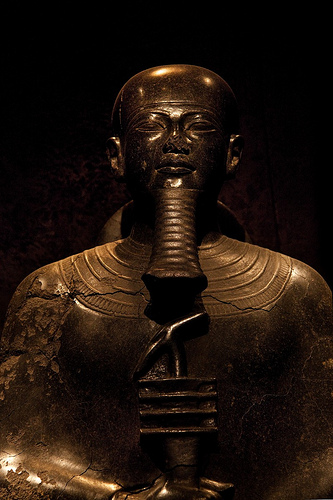 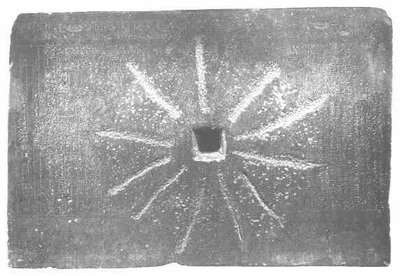 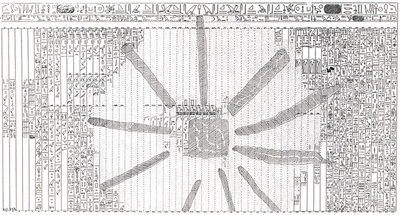 Tehuti was the spiritual and intellectual master whom Sages of all cultures and all ages declared to be the greatest master of them all. Ancient African Sages said The Metu Neter (Mdw-Ntr, “The Words of God”) was brought to them by Tehuti, the one so ancient that he became a myth. Regarding his birth period, Saleem (The Egyptian Book of Life p10) says this carrier of divine intelligence lived c50,509 BC. However, many would say 12,000 BC. Nevertheless, he was eventually elevated to a god-man--and then to god of Wisdom (the highest of the deity concepts of the mind) + god of Medicine, Healing, and protector of priest-physicians + "god of the Scribes" (recorder of the "Weighing of the Heart" ceremony taking place after a human's death) + god of writing, communications, language, architecture, mathematics, accounting, physics, astronomy, science, and magic. Tehuti was particularly skilled at the art of sealing airtight containers--hence the term "Hermetically sealed." For the people, each of these concepts was symbolized by African Groits (storytellers) and African artists in the form of Affect Symbolic Imagery (ASI). Examples: Tehuti was depicted as a baboon because the baboon's grave facial expression suggested thoughtfulness. Most commonly, he is displayed as an ibis-headed god to symbolize a bird form of the transcendent principle--i.e. coming to the reality of the instability of all external things. Only what comes from ones Soul is stable and that is the source for living a steady unchanging life inside a changeless reality. In this way one can reconcile the conflicting elements of ones personality--striking a balance that makes one truly human and truly master of oneself, master of what one does, and master of the situation one is in. The ibis--a wading bird related to the stork and the heron--has a long beak suggestive of a writing instrument in keeping with some believing Tehuti was the inventor of Hieroglyphics. Wading, a metaphor for the spiritual learning required, means walking in or through a substance such as water, that offers resistance, as well as impedes or makes movement difficult. For this to represent Intellect implies the mind must have the capacity to cut (wade) through the myriad of thoughts and concepts (water-ocean of consciousness) in order to get to the truth.

Tehuti, as an associate with the moon, wore on his head a lunar disc and crescent to indicate knowing secrets of time and measurement. The moon-god name "Thoth" (Taut; Troth--pronounced T-ho-t, with 3 syllables) means The Measurer--god of Thought. The crescent moon symbol of Djehuti is a figure of the moon in its first quarter, with concave and convex edges (curved like the inner and outward surfaces of a sphere, respectively), terminating in points. This signifies increased understanding, reason, and spiritual wisdom. These are features of "right reason"--the link to ones Higher Self. The crescent moon symbolizes waxing or increasing spiritual knowledge, increasing purity of intellect and the development of intuitional wisdom. (Ashby, Serpent Power p76-9). As a result, he knew how to cultivate areas of the brain (?the temporal lobe) so as to stimulate certain processes of the Mysteries--the consciousness of any human to be extended to the point of permitting the beholding of the Immortals and enter into the presence of the superior gods. One of the many reasons Tehuti was elevated to the status of god is he outlined ways to achieve equilibrium between the interest of the whole and the person. African sages considered Tehuti the interpreter of all that was divine and the conveyor of the “Word of God” by means of a system of symbols--the Very Ancient African sacred language. Though this Medu-Netru symbol language stands apart from Reality, it ever reminds the user of Nature and its laws--Symbols composed of all of Nature, whether made by God or humans, and possessing geometric value, volume, sound, energy, color, and effect. Its origin was a divine revelation which embodied the Word of God or the natural laws. Although non-Africans thought of “the Word” in physical, concrete terms, the words of Tehuti were related to the process of thought and speech and thereby to divine wisdom. Revealed to him was the Physical world being temporal and with the underlying theme that what is above parallels what is below--the Law of Correspondence. What first exists in the Spiritual is later manifest in the physical. Thus, the Spiritual and the Material are interwoven and must be pursued together (Bailey, Teaching Black Youth). 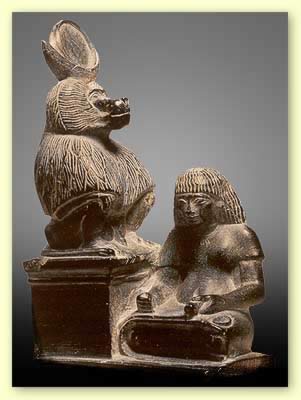 Tehuti has long been known as the 'teachers' teacher--the mediator, the one who sees the 'big picture' and finds a solution for every problem. The beginning of his teachings was centered on the “love of truth and the hatred of abomination.” He crystallized the kernel of the true meaning of Wisdom by saying the will of humans must be directed by God (Amen, Metu Neter I:159). The process of progress is through vibrations--the means by which ones mind creates thoughts compatible with the Cosmic Mind as well as the means by which the Cosmic Mind (God) brings into being and sustains Creation. His intention was to urge people ever upward toward higher learning so as to be able to understand the deeper meanings of their lives; internalize or embody its truth; and articulate and share that wisdom authentically from an enlightened place. This form of communication has its basis in the Soul's fountain of wisdom. Tehuti left hidden repositories of knowledge around the world so his knowledge would be preserved--hidden so that only the worthy and initiated would find them. He cautioned those, upon making the determination to pursue the Divine, about "the struggles" arising--a holy war against ignorance, illusions, and delusions within ones consciousness. 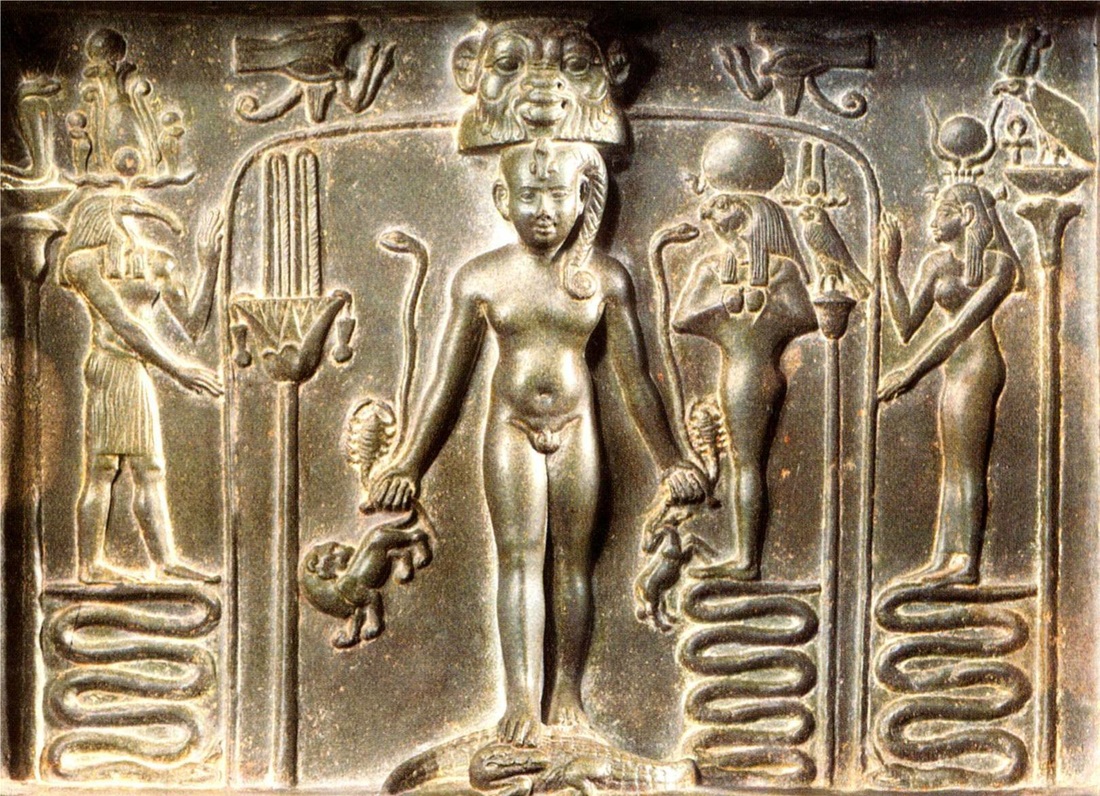 Tehuti was said to command all great Egyptian books of Wisdom--the Emeral Tablet, The Divine Pymander. He also hand-wrote 'the Sacred Books'--42 papyrus rolls containing all the world's wisdom, including the laws of Egypt; everything known about effective occult and esoteric Magic; and crystallized the long evolving Ancient African Bible under the title "Book of Going Forth by Day." Some rolls were inscribed mathematical problems; 10 were religious, consulted for all rituals and festival celebrations from generation to generation; 10 others discussed priestly obligations and regulations; and skilled astronomers of every temple had to memorize the 4 texts of astrology and astronomy included in these rolls. Other books concerned philosophy and medical treatises. These works resided in the 'House of Life' and in temple libraries. His chief cult center was that of Hemopolis Magna (ancient Khmun; modern el-Ashmunein) in Middle Egypt.
7 LAWS OF TEHUTI

Outside Africa, Tehuti was a universal Indo-European god. During the Ptolemaic Period (332-30 BC), the Greeks borrowed Tehuti--who had written the nature of the Physical Universe-- under the name Hermes-Thot and “Hermes Trismegistus” because they deemed him the world’s first and only great, great, great master of the masters." They accepted his knowledge as ancient Wisdom; considered him a 'Psycho-Pomp' (Soul-guide of the dead to the Underworld); and characterized him variously, typically concerning things lacking spirituality as, for example, being mischievously disguised as a goat-herd. That silliness is one reason Ancient Africans did not like teaching the Greeks. Plato supported this by saying: "Compared with the Egyptians, the Greeks are childish mathematicians." The Romans called Tehuti Mercury, the messenger of the gods. His winged staff above the serpents was the African Caduceus indicating the power of transcendence. 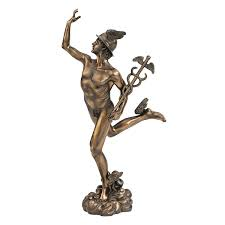 Mercury (Hermes)
The Mahanirvanatan of India said Buddha was the same as Mercury (Hermes). The Yogis of the East also considered Tehuti the “Master of Masters”--“The Great Great”--the personification of the Mind of God. In elaborating, they said: “All the fundamental and basic teachings embedded in the esoteric teachings—i.e. understanding the inner truth lying hidden within the core of their fundamental beliefs--of every race may be traced back to Hermes. Saxons worshipped Tehuti as the Hermeseul; Germans as Thot or Teutatis, "Father of Teutons" and Woden, Othin; in Britain, Zil of Silbury; Hebrews and Arabs, Al-Khedr; Christians, archangel Michael. Early European Christianity used Tehuti's principles. The Western magical tradition, the Hermetic tradition--and the tarot are all sourced from Thoth. In Mexico, the Mayan Botan--the Mayan temple called Teotihuacan--the Astec Tecuhtli (grandfather or lord)--the Indo-Tibetan Khubil-Khan--and the ancient Celtic demigod Cuchulain all mean Tehuti. In different eras he was in various legends (e.g. with Horus, with Creation) and called the "Lord of Heavens," "Beautiful of Night," and the "Silent Being." Tehuti spoke of ultra-microscopic things on earth and in the sky that have only recently been proven in the West with highly specialized technology. From Thoth comes the word "Thought." 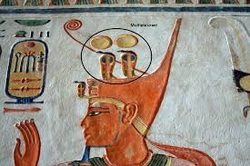 The cobra is an emblem of Lower Egypt. It is associated with the king, and kingdom of Lower Egypt. It is also associated with the sun and with many deities. The cobra represented the "fiery eye of Re", in which two uraei can be seen on either side of a winged solar disk. Starting in Middle Kingdom The uraeus appears as a symbol worn on the crown or headdress of royalty. It is used as a protective symbol, the Egyptians believed that the cobra would spit fire at any approaching enemies.
The Uraeus, used as a symbol of sovereignty, royalty, deity, and divine authority in ancient Egypt.